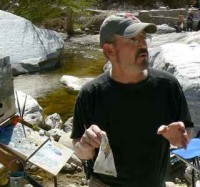 Growing up on his family’s ranch near Sterling, Colorado, where they raised American Quarter Horses, Skip Whitcomb knew early on he wanted to be an artist. Trained in figure study and illustration at the Art Center College of Design in Los Angeles, California, he moved to Denver, Colorado, in 1971. Soon after, he met painter Ned Jacob and sculptor Ken Bunn, two of the central figures of a group of artists later referred to as “The Denver Group.” They convinced Whitcomb to embark on a career as a fine artist.

An accomplished outdoor painter, Whitcomb has received numerous awards and his work resides in major public and private collections. He has had several one-man shows and participated in numerous invitational exhibitions. At the 2017 Prix de West Show in Oklahoma City, the artist was honored with the Donald Teague Memorial Award, for best work on paper.

“The detail of the physical world is subdued in response to the spiritual one,” Whitcomb says. “Once you internalize the language of painting, you never see the world the same way. It never leaves you. The veil of rational order is lifted and what hangs in the air are sensations of painted possibilities. On good days, some would call it poetry.”