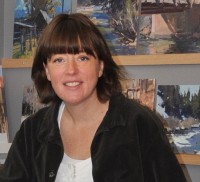 “Nature has provided me with a spiritual compass in life, and observing it and drawing it has always been, for me, the most rewarding way to honor that reverence. I believe that the knowledge gained through quiet observation, study and meditation is just as important as the actual application of paint to canvas. Rather than go out into the landscape with the notion of ‘seeking’ a painting, I find that the stronger ideas appear to me, or are given to me, when I am hiking, walking my dogs, fishing, or meditating – when I am utterly ‘present’; when I am the student, the observer, and the recipient; when I ‘listen’ rather than impose my will. I then return to the scene as a ‘hunter-gatherer’ and make numerous field studies and notes before I develop the piece in the studio. For me a painting should be evidence of a process of observation and acquired knowledge rather than a concluding statement. The process, not the product, is the closest I have come to ‘living life’ in its truest sense.

My work explores the dialogue between abstraction and realism, and I enjoy that ‘dance’ or ‘tension’.  As I keep reminding my students, artists should think of themselves as poets rather than journalists. I want to say something ‘specific’ about my reaction to a place or a moment in time – to capture the essence but not the whole. I process any idea through analyzing it in terms of shapes of abstract color rather than content. Certain elements will be eliminated totally and others exaggerated to achieve that goal. I particularly enjoy taking something ordinary or incidental and creating an iconic image of it that celebrates nature and challenges the viewer to be more observant of their surroundings.”

Originally from London, England, Jill Carver moved to the United States fourteen years ago. Before becoming a full time professional artist, she was a curatorial research assistant at the National Portrait Gallery in London for 12 years. Jill currently divides her time between Austin, Texas, and Rico, Colorado.

A ‘painter’s painter’, recognition for her work has come quickly. In 2014, she won the Gold Medal (Artists’ Choice) for Best in Show at Maynard Dixon Country and in the same year was inaugurated as Signature Member in ‘Plein Air Painters of America’. Previously, she won numerous awards including: ‘Artists Choice’ at the Laguna Beach Invitational in 2009; at Telluride, also in 2009; and, at Plein Air Easton in 2008. She has participated in the prestigious Maynard Dixon Country event for five consecutive years and the Artistic Horizons show in Bozeman, MT, for three years. She is a popular and highly regarded teacher.

2003 The Gallery at Spicewood, Texas

2005 Showcase at Laguna Gloria (Night in the Gallery), Austin, Texas