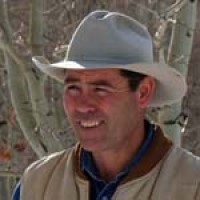 Grant Redden lives and paints in southwestern Wyoming in the rural community of Hilliard with his wife and family. With no formal art training, he has studied under the tutelage of several master artists in today’s art world: Mark Daily, Jim Norton, Walt Gonske, Gerald Fritzler, and Gerald Merfeld. He has also immersed himself in the study of deceased artists and draws much inspiration from the works of Sargent, Sorolla, Fechin, and many of the American Impressionists such as Twachtman, Metcalf, and Weir. Grant’s subject matter varies from landscapes to western themes to still life. Growing up working sheep and cattle on his father’s ranch, Grant is familiar with the horse and rural life of the west. Working in oil, watercolor, and occasionally in pastel, he has developed a sensitivity and style all his own but the influence of his mentors is felt in the broad range of textures in his paintings and colors on his pallet. In addition to depicting traditional western life and landscapes, Grant has traveled abroad to Italy, Mexico, Ireland, and Brittany. Grant has participated in gallery group shows and annual shows by Settlers West Gallery, the Charles Russell Museum, the Salon d Arts “le jeune” Show in 2005 and 2006, and the Coors Western Art Show in 2005 and 2006, in Denver, Colorado. He participated as a guest artist in 2000 with the Northwest Rendezvous Artist Group of Helena, Montana, and has been invited to show, as a guest artist, again in 2007. Grant has participated in the annual Buffalo Bill Art Show and Sale in Cody, Wyoming for the past six years. He was awarded an Artists Choice Award in that show in 2006. Grant was included in the first Rising Stars show in Wickenburg, Arizona in 2000. Grant received a major honor in his painting career in 2012 when he was inducted into the prestigious Cowboy Artists of America. His debut at the show held at the National Cowboy and Western Heritage Center in Oklahoma City took place in 2013.  Grant was awarded the Gold Medal for Oil at his first two shows with the Cowboy Artists group in 2013 and 2014.

Grant has continued his success with the Cowboy Artist of America by winning the Stetson CAA Award for best body of work in 2016 and 2018. This award is voted on by Grant’s peer artists in the show. In 2018 his painting Mowing the Meadow received the Anne Marion Best of Show Award and the Gold Medal for Oil.