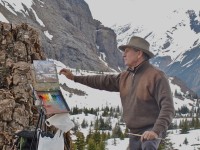 In 2012 Andrew Peters was included in the Masters of the American West at the Autry National Center in Los Angeles for the eighth year. He will once again be a featured artist for the 2013 event in February. Andrew is also a featured artist at the Prix de West Show at the National Cowboy and Western Heritage Museum in Oklahoma City having exhibited his work six years in a row.

Andrew Peters’ paintings are the result of a life spent in nature. Growing up in Council Bluffs, Iowa, he was usually hunting and fishing with his father in the Missouri River Valley. At nearby Fontenelle Forest Nature Preserve, Andrew was mentored in ecology by naturalist James Malkowski. He drew birds from life and Audubon prints, and studied academic painting in the studio of Fran Day. He earned a bachelor of Sciences degree from Iowa State University with a minor in art, and won the Iowa Duck Stamp competition at the age of 22, which launched his fine art career.

The Joslyn Art Museum provided Andrew with his earliest art lessons and the complete collection of original watercolors by Karl Bodmer which kindled his passion for travel and painting onsite. He roamed Africa for a year painting game animals and indigenous peoples. He has painted throughout North and South America and in Romania, Morocco, Spain, Italy, France, and Ireland. His plein air paintings faithfully capture light and beauty from life and are a key strength of his richly imbued larger works. “A painting should read like a window onto a place,” he says, “luminous and fresh. He believes that light- not line- determines form.

During each summer Andrew roams the intermountain west painting in the Nomad, his travel trailer modified into a studio. It puts him near his subjects for as long as needed to create works both elaborate and true. He builds crates, ships to galleries and museums and continues onward in search of new landscapes. “It is sustainable travel, mostly in wilderness and without constraints”. He has traveled 16,000 miles in a few months in this way and believes it to be the best way to create the highest quality paintings of the American landscape. Andrew resides in Council Bluffs, Iowa.